What is Gerstmann Syndrome?

Gerstmann Syndrome is a rare neurological degenerative disorder, develops due to lesion obtained due to developmental malfunctioning or brain injury, which affects the dominant parietal lobe present at the angular gyrus. 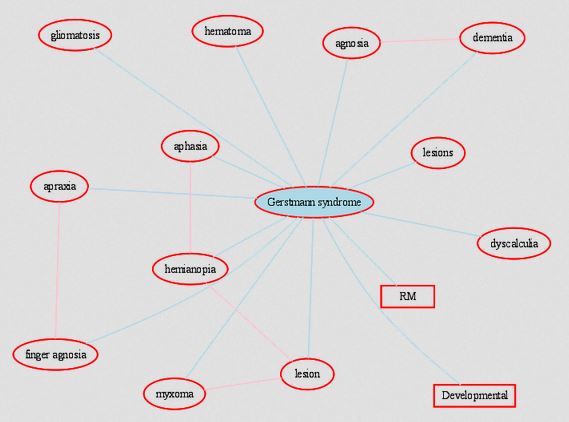 But in very rare cases, all four symptoms appear without learning disability for the same individual. When agraphia, acalculia, agnosia and incapability of side discrimination without mental retardation is typical characteristics and referred to as “pure” Gerstmann syndrome. Usually, all four mentioned clinical characteristics are present with other deficits, But it is also possible that all four symptoms may not present at all together.

In addition, some individuals also have a problem in expressing their feeling tough speech, even they cannot properly understand other’s speech (aphasia). They may have difficulty in reading and understanding of spelling.

Children usually have developmental Gerstmann syndrome, which is recognizable after school admission. They may have poor handwriting, difficulty in understanding of simple calculations and spelling, unable to copying or tracing simple words or drawing2,3,4.

Cerebrovascular disease, like stroke or another injury to the brain, in which blood circulation become impaired into the brain is one of the major cause of developing Gerstmann Syndrome in adults. In Gerstmann syndrome, parietal lobes of the brain become affected. Therefore, symptoms are all related to lack of sensory and perception, even understanding of sensory input become impaired, as parietal lobes of the brain are responsible for these types of mechanism.

Traumatic brain injury or a brain tumor in the parietal lobes can also cause similar symptoms associated with Gerstmann syndrome. The cause of developmental Gerstmann syndrome in children is not yet understood properly. It is assumed that brain damage at the particular region of the brain can be a cause of the onset of Gerstmann syndrome1,2.

Both male and female equally have the risk of development of Gerstmann syndrome, though the incidence of this disease is very rare in general population. The disease name is derived from Dr. Josef Gerstmann, a Viennese neurologist, who first described this disorder in 19242.

Differential diagnosis is performed in Gerstmann syndrome after a symptomatic analysis found all four neurological symptoms in adults to exclude the chance of other possible underlying causes.

The primary diagnosis is based on symptomatic analysis and in the case of children it can usually possible at school going age. The symptom analysis is possible by close observation of spelling problems, unsolved simple calculation, poor handwriting, etc. Trouble in left and right side distinction can be measured by asking the affected children to show right-hand index finger and they generally fail to do, even simple drawing they cannot draw 2.

Depending on the underlying cause, many symptoms may diminishing with time in adults. But in children, this outcome does not properly measure, because it has been assumed that most children possibly do not defeat their deficit, but become skilled in adjusting with their difficulties 5.