Heartburn is said to be a sensation of burning that is felt in the chest and it occurs when you have stomach acid backing up to the food pipe or oesophagus. The burning sensation feels more in the central region of the chest, behind the breastbone or sternum. The sensation can get worse or it can come about due to lying flat or when you lie on your right side. It is also likely that during pregnancy, the heartburn will aggravate. Many people will experience heartburn, but there are a big number of OTC medications as well as home remedies that can help treat the condition. In most cases, it is not necessary to see a physician, but when you have the symptoms of heartburn occurring frequently, say several times in a week or when the severity of the symptoms increases, you may want to consult with a health-care professional.1,5 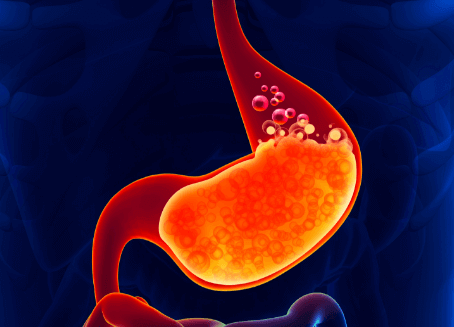 Treating heartburn is important because the acid can damage the oesophagus. With heartburn, it has nothing to be associated with the heart, however, the discomfort that arises from heartburn can at times be confused with having heart pain or vice versa. In medical terms, heartburn is referred to as pyrosis.

Heartburn may be a symptom of a condition like acid reflux or GERD, it mostly occurs after having a meal, however, it can also occur at night thus awakening you from sleep. Some people also experience the burning sensation of heartburn after they eat certain foods or drink some beverages.

In heartburn, the stomach regurgitates or throws up the food in your stomach along with a good amount of gastric juice or hydrochloric acid.

Once the acid touches the cardia, it causes a tingling, burning sensation on the chest area most notably near the heart which leads to its characteristic everyday description.

The reason why the stomach throws up its contents upwards of the esophagus to be vomited are many, but a discussion on the stomach’s anatomy and physiology will help elucidate concepts central to the development of heartburn.

The stomach is a J-shaped, hollow, muscular organ that has 4 different parts. These are the cardia, the body, the fundus and the antrum. Each of them has different populations of cells that are responsible for aiding in digestion.

For example, in the cardia and antrum, the cells are composed mostly of G cells that secrete gastrin, a hormone responsible for stimulating the parietal cells in the body and the fundus to secrete hydrochloric acid. Chief cells are also present, responsible for secreting pepsin that helps in protein digestion.

The process of producing hydrochloric acid begins with the visual stimulation of the presence of food. The brain will send signals via the vagus nerve to the stomach to stimulate the G cells located in the cardia and antrum to secrete gastrin; gastrin in turn via the Hydrogen/Potassium/Adenosine Triphosphate pump will cause the parietal cells to mix hydrogen ions in the blood with existing chloride stores creating the hydrochloric acid.

This acid will then act upon the food in the stomach and, combined with mechanical movement and the rugged surface area of the stomach reduce food to a pasty mixture called chyme ready for further processing down in the intestines.

Unfortunately, hydrochloric acid is caustic; the high concentration of hydrogen ions approaches a pH value of almost 1, which is a thousand times more than water which has a pH of 7 or neutral.

This property is what’s responsible for reacting with delicate tissue in the bottom part of the esophagus that erode and irritate its luminal surface.

Constant heartburn may be related to a medical condition known as Gastroesophageal reflux disease or GERD. If not given enough attention, this could lead to Barret’s esophagus, where there is a dysplastic change in the type of cells occupying the esophagus. With Barret’s esophagus, there is an increased chance of developing adenocarcinoma.

Symptoms and Signs of Heartburn

When you have heartburn there is uncomfortable feeling that arises due to the burning and warmth occurring behind the breastbone. The burning sensation at times can rise as high as reaching the neck area. Heartburn is mainly due to a condition known as gastroesophageal reflux disease or GERD.

There are many symptoms that come with heartburn and the most common one is the burning sensation. A person may also experience the following when they have heartburn:1,2,3

If you have heartburn symptoms that come along with other symptoms such as dizziness, cold sweat, radiation running to the neck and arms, or shortness of breath, you should have immediate medical help because it could indicate a sign of heart disease.

Certain medical conditions that exist may to cause heartburn; one very common cause is hiatal hernia in which this causes a weakening in the normal constriction of the lower esophageal sphincter (LES). Since the sphincter is no longer tight, mild changes in position or even exerting effort may cause gastric contents to reflux upwards.

The upper part of the stomach protrudes into the thoracic cavity and this may be caused by excessive weight lifting, exertion, violent coughing and sneezing. Another cause would be obesity, in which the condition has been associated with an increased incidence in changes of the structure of the esophagus.

One large study involving 2000 plus patients associated 13% chance for esophageal disruption. Zollinger-Ellison Syndrome may also be a culprit in the development of heart burn. What happens is that tumors cause an overproduction of gastric acid, increasing the incidence of retching and vomiting up hydrochloric acid. 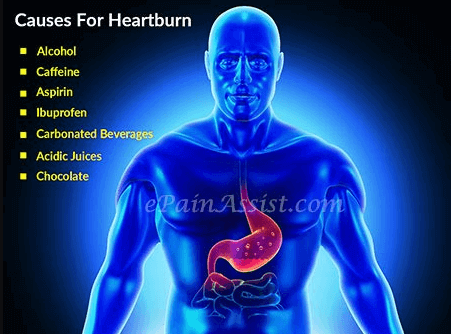 Certain foods and drinks may cause heartburn and they include:

People react to foods in different ways. You may want to track the foods that are worsening the symptoms of heartburn and try to avoid them. A food journal helps you to know what you eat and the time you eat. You may also include the activities that tend to worsen the symptoms or make the heartburn better. With time, you can correlate what foods offend you with the heartburn events you have had.

When diagnosing a patient of heartburn, all a doctor may need is to have a thorough history as well as physical information of the patient. This helps to make the preliminary heartburn diagnosis. The doctor may further suggest that a patient have tests to find out if there is damage caused by heartburn or to establish the severity of the condition. The tests include:1,4

During pregnancy, the lower esophageal sphincter (LES) is usually weakened something that aggravates heartburn. The weakening of the LES will resolve after you deliver your baby. It is also believed that pregnancy distorts the organs found in the woman’s abdomen thus increasing abdominal pressure because of the developing fetus. When this happens, heartburn may arise.

It is estimated that about 17 to 45 percent of pregnant women will have heartburn. While people having heartburn may use medication, there aren’t clear studies to indicate on the safety of using medications for heartburn when pregnant. 1

Researchers can’t actually test drugs intended for treatment of heartburn on pregnant women with the aim of finding out how safe they could be to the growing fetus. There is also no evidence suggesting that most acid suppressing or neutralizing drugs are able to harm the fetus, however, it is preferred that a pregnant woman uses non-absorbable medications. Management of heartburn at time of pregnancy may consist of home remedies and changes in lifestyle.1

Many over-the-counter medications exist to help in the treatment of heartburn. The medications fall into three groups:1,2,3

Acid neutralizing medications: These are drugs that are used to neutralize stomach acids and they are called antacids. The common ones are Maalox, Mylanta, Tums, and Rolaids. Antacids can offer quick relief because they reduce the acid in the stomach. However, you should realize that antacids don’t usually heal the damage that could have been caused by the acid on the oesophagus and they don’t prevent further occurrences of heartburn.

Medications to reduce acid production: Drugs used to reduce acid production in the stomach are usually named after the kind of receptor they tend to block and they are known as H-2 blockers. You can find these medications over the counter though doctors may also prescribe them to patients. When used, H-2 blockers offer relief that lasts longer when compared to antacids, however, they also take longer to begin action. The medications include ranitidine or Zantac, cimetidine or Tagamet, nizatidine or Axid, and famotidine or Pepcid.

Much of the treatment aimed at stopping heartburn is done to reduce stomach acids from being formed or produced. Home remedies include:1,2

What Should Be Done To Avoid Heartburn?

Once you detect that you are experiencing increasing frequencies of heartburn, it may be time to consult a medical professional on its underlying cause. Infections such as that of the well-studied bacteria Helicobacter pylori are now known as the most common cause of chronic gastritis.

Impaired protection from the bicarbonate usually secreted by the stomach cells are impaired leading to increased incidences of ulcers which can increase gastric acid reflux. For cases such as these it will take a long time before the manifestations of GERD will come about.

If you suspect that you or family member is infected, a simple urease breath test may be used to screen for H. pylori infection. The doctor may prescribe a combination therapy of clarithromycin, amoxicillin, omeprazole and bismuth to decrease heart burn.

Other cases, such as hiatal hernia, the hernia presents no lasting, life altering problems. Sips of warm water, avoiding lying down after meals and preventing exertional efforts such as Valsalva maneuver will help decrease incidences of heart burn.

Obesity may be addressed by initiating weight reduction behaviors such as reducing processed food intake and getting about 30-60 minutes of exercise 3 times a week.

The decreased abdominal pressure from abdominal girth of fat will decrease the upward pressure on the stomach. This will notably help in decreasing the incidences of heartburn.

Another notable feature of heartburn is its association with heart attack; physicians are trained to distinguish the burning pain of heartburn from the stabbing, crushing pain associated with myocardial infarction. Due to the lethality of heart attack, physicians will be asking you about the duration and the quality of the pain to learn more about what is causing it.

Heartburn is a common condition that affects a lot of people. You yourself might have personally experienced it. It may be caused by an infection or a structural defect but with good practices of anti-heartburn behavior as well as treating underlying infection, you can be assured to live a good quality of life.

Heartburn: Why it happens and what to do. Available at https://www.medicalnewstoday.com/articles/9151.php