Hypovolemia or oligemia is a term when blood plasma is decreased. There are many nuances about the definition as the term is heavily associated with shock. Great amounts of sodium chloride are lost in hypovolemia which differs from dehydration which is excessive loss of body water.

In order to truly understand what hypovolemia means, we must look at the cardiovascular system for a deeper understanding on the mechanism of how hypovolemia comes about.

First, let’s look at the organ system that is concerned in hypovolemia.

The cardiovascular system is a result of years of evolution from a scientific perspective. Early forms of life were single-celled and relied on the environment to acquire nutrients for growth and development.

But as evolutionary process went about, the single celled prokaryotes became eukaryotes, or simply they had a better organized cell structure that improved the efficiency of the cell by assigning different organelles jobs that were critical to maintaining growth and survival.

Eventually, the single-celled organisms, through a series of evolutionary process were able to evolve into multi-cellular organisms.

Since the cells were already many and compact, a newer system would be needed to provide nutrients as well as remove waste products, hence the birth of the cardiovascular system that is present in virtually all multicellular organisms.

The single cell organisms relies on its environment directly to acquire energy sources and excrete wastes, this is advantageous that no other processes are required, nutrients simply diffuse in and waste products diffuse out.

However, such organisms are at the beck and call of nature, when conditions are not so forgiving, the cell cannot meet its energy requirements that results into greatly reducing survival rates. 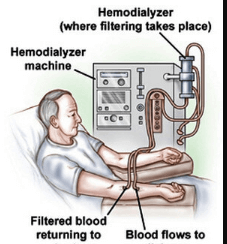 What does the cardiovascular system do?

The cardiovascular system is evolved to provide continuous nourishment and waste elimination in multicellular organisms.

The advantages provided by a cardiovascular system allow the multicellular organ to efficiently distribute nutrients and remove waste products by virtue of a continuous stream that provides all metabolic substrates at a constant rate.

Amphibians (think frogs and lizards) have a circulatory system that allows for adaptation to extremes in environment conditions.

For these animals, low food supply and low temperatures mean that they can drop their body temperature much lower than warm-blooded animals can (hence, the term “cold-blooded”). This allows for much sparing use of energy and allows them to survive in the area they are native too.

The disadvantages are also apparent, since they cannot maintain body temperature at a normal range, they have to rely on the sun’s energy to warm them up and make their muscles limber enough to function. They also cannot expend as much energy for work or travel or remove excesses of heat or cold as warm-blooded animals.

Warm-blooded animals on the other hand maintain a body temperature in a narrow range as part of an internal milieu that allows them to maximize the efficiency of cell metabolism.

Hence, human beings are capable of tolerating extreme temperatures as well as explosive bursts of energy in fight or flight responses but require a lot of food and energy to maintain so.

What happens in Hypovolemia?

The drawback of such a system is that in an event that the cardiovascular system is compromised in cases of excessive vomiting, diarrhea, massive hemorrhage or dehydration, the whole organism starts to experience systemic effects such body weakness, shivering and neurologic deficits.

The most common case of hypovolemia is in hemorrhage where in blood loss with resultant plasma volume reduction results into the signs and symptoms of shock. The earliest sign of shock is tachycardia or increased heart rate greater than 100 beats per minute.

At lower amounts of blood loss, the body is able to compensate by reducing sodium excretion which draws in water into the intravascular lumen, maintaining blood plasma levels and restoring blood pressure to normal.

But as the hypovolemia worsens with ongoing blood loss and no available plasma replacement, the body cannot compensate and the cells of different vital organs such as the brain, the heart and the kidneys start to die..

If left without medical attention, the cells are deprived of vital nutrients and waste products of metabolism build up leading to multi-organ failure and eventually death.

Other cases of hypovolemia are in cases of excessive vomiting and diarrhea which leads to loss of total body fluid with concomitant acid-base balance disorders. This also results into body weakness and neurologic deficits.

Dehydration is another concern, without constant water intake, the body will attempt to conserve fluid via a hormone in the posterior pituitary gland known as anti-diuretic hormone or vasopressin.

With more days without adequate fluid replacement the body’s total plasma volume contracts and the urine becomes more concentrated in an effort to conserve water.

As soon as the body experiences a decrease in total plasma volume due to any of the above mentioned cases, the patient will first exhibit the sign of tachycardia.

If the patient is in the process of losing fluid, fluid replacement therefore is the initial management. Once the fluid volume has been replaced, the cause of the hypovolemia must be determined to stop ongoing fluid losses.

In the cases of hemorrhage the bleeding vessel must be identified and ligated, in cases of vomiting and diarrhea, the underlying infection needs to be treated to prevent the bacteria from causing gastrointestinal enteritis that further causes diarrhea and vomiting with electrolyte replenishment. In cases of dehydration, the patient simply needs to drink more fluids.

Hypovolemia is one of the drawbacks of a multicellular organs efficient delivery system. The conditions above are what cause the hypovolemia and may lead to death if left unattended. But with proper fluid replenishment and blood pressure monitoring as well as treating the underlying cause, this catastrophic condition can be avoided.