What is Fossa Ovalis (Anatomy)?

The spectrum is the wall that separates the right and left atrium in the heart. However, the Fossa ovalis is recognized as the remnant of a sheet that covers the Foramen Ovale during the development of the fetus. This remains open during the fetal development and is called as the Foramen Ovale and formed just after the birth. The depression is generally oval shaped and has huge importance in the embryonic growth and clinical importance. 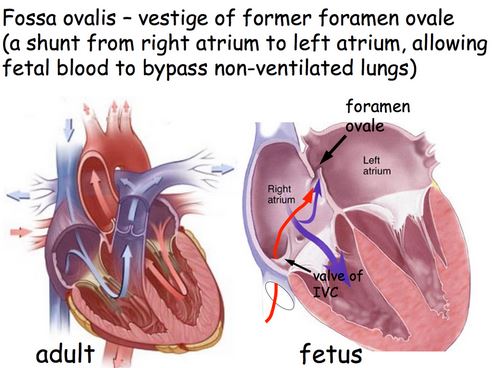 There are many functions of the Fossa ovalis. Basically, it separates the heart into two halves right and left. It helps in distributing the oxygenated blood in the body through lungs. However, the importance of the Fossa ovalis in fetal development is even more important. During the embryonic development, the blood must pass through the open Foramen Ovale from right to the left directly.

Lungs are always bypassed during fetal development until birth. There are two prime reasons for it. The first is that the embryo already receives the oxygenated blood from the umbilical cord of the mother and no need of purification. Another reason is that the lungs are never used even though present in the embryo until the birth of the baby. Fossa ovalis is one of the most important parts of the Cardiovascular System of human since the fetal development until the death.

Closure of the Foramen Ovale

As the baby grows and starts using the lungs, the pressure is created in the Foramen Ovale causing it to close. It has been observed that the closure happens within the three months of the birth. However, the closure does not have any fixed timeline. The Foramen Ovale may become Fossa ovalis within three months or even after two years after the birth. There are cases where it has been noticed that the Fossa ovalis never completely closes.

However, clinically, there is no importance of it and is called Patent Foramen Ovale or PFO. The non-closure does not impact the heart and has no symptoms at all. Many people do not even know the existence of the PFO in them. Many Medical researches have published that 34% people have the problem of PFO. A small hole is formed where the Fossa ovalis should have been formed. PFO can be recognized and identified by the diagnosis like Echocardiogram.

No apparent cause of clinical importance is medically proven for Fossa ovalis. However, the defect may sometime cause few problems. However, the problems are not documented and proven facts but treatments, feedback of the patients and the trend have established strong links between the problem and PFO.

Stroke is one of the aspects that is often associated with the Fossa ovalis and the Patent Foramen Ovale. Even though there is no documented connection but it has been seen that Aspirin Therapy has worked for many patients who have earlier experienced strokes without any definite reason. However, there are other complications impossible that could lead to stroke. Blood Clotting in the PFO region may trigger emergency and stroke.

There are methods to remove the clot as well with medication to thin the blood. References from different cases of strokes without any reason can be drawn to understand the clinical importance of the Fossa ovalis. Surgery is often recommended to close the Fossa ovalis in cases of repetitive strokes without any apparent reason. Surgery remained beneficial for the patient in most of the occasions.

There is an even stronger connection with Migraine and PFO. It has been noticed that people with PFO are more susceptible migraine than others. However, as said there is no medical documentation for the same. However, research papers from various medical establishments have shown the link between Migraine, Stroke, and PFO. The surgery for the PFO may very well reduce the problem of Migraine.

The defect in the heart in Fossa ovalis is often concerned as a non harmful problem. However, at the same time many distinct correlations have been established between PFO and the complications in the human health.