What is Radial Head Fracture?

Radial head fracture is a type of elbow fracture. Many people will try to break a fall using their hands and it may seem something brilliant, but that force arising from the fall could easily move through the forearm to reach the elbow where it causes injury or dislocation.

That force could also cause breaking of radius, a small borne found in the forearm. A majority of fractures involving the radius occur in the bone close to the elbow, and this bone is known as the radial “head.”

The radius bone is one of two bones in the forearm, the other being the ulna. The radius bone joins together with the arm bone also known as the humerus to form a joint at the elbow. The radial “head” is that part of the bone that forms the elbow. 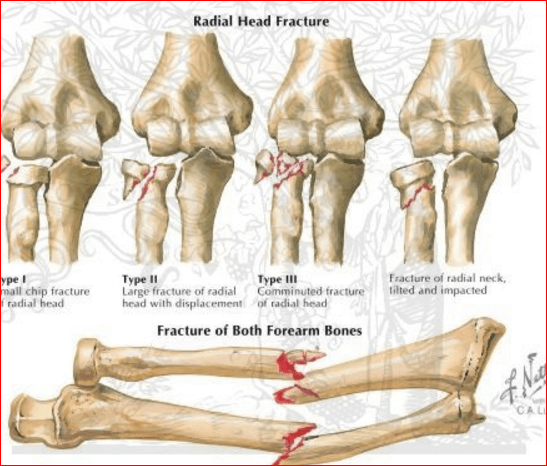 How do Radial Head Fracture Occur?

This type of injury usually occurs when you fall either onto your elbow or commonly when you fall onto an outstretched hand and the force of the fall is transmitted up the forearm to the elbow. The injury can occur in isolation but injury to the radial head usually involves a combination of other injuries within the forearm or elbow. Such injuries can include a dislocation at the elbow or a fracture to the other bone in the forearm, the ulna.

Who is Mostly Affected by this Type of Injury?

Radial head fractureare the prevalent type of injury to the elbow among adults, while in children it is usually a fracturing of the radial neck (the part of the radial bone just below the radial head).

Diagnosis of a radial head fracture entails the following:

When a broken elbow is suspected the doctor will need to take an X- ray to check on how severe the injury to the elbow is. The X-rays are then used to classify the injury, the classification ranges from Mason type 1, 2 or 3. X-rays are classified as:

What Happens During Surgery?

Surgery is one of the methods of treating radial head fracture where the breakage of the radial bone is severe. During surgery, a small screw is used to put the bone fragments back in place. These screws give stability to the broken bone so that the elbow can start moving without the risk of making the breakage worse, especially during physical therapy.

By restoring the normal shape of the radial head, it is a measure for preventing post-traumatic arthritis and stiffness as well.

In cases where the radial head gets shattered resulting in multiple breaks, the pieces of bone can at times be too small to put back in place surgically using screws, although it can be done by some exceptional surgeons.

So, in such cases where the shattered bone of the radial head is beyond repair, all the fragments are removed and metal replacements are inserted.

In case of a Mason type 3 injury, sometimes the entire radial head can just be removed. This treatment, however is suitable for elderly individuals and low demand patients that have a stable elbow meaning all the ligaments are intact.

Since the radial head gives stability to the elbow, its removal means you risk creating instability and it could cause elbow dislocations, especially where all the ligaments were also torn during the injury.

The small breaks or hairline cracks to the radial bone that are treated using a sling and early motion, usually after a few days after treatment heal well, and the elbow regains full function, although at times it may not completely straighten out missing with about 10-15 degrees from the previous position.

Although surgical treatment methods have improved significantly such as the use of smaller screws, where metal plates are used, some people develop arthritis due to the contact between the metal plate and the cartilage. 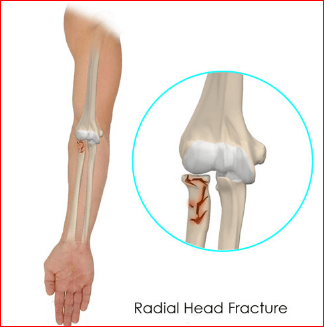 When it comes to radial head fracture , physical therapy compliments treatment and it is therefore recommended to start moving the elbow after a few days so as to reduce stiffness. At times, doctors opt not to repair the injured part of the radial head, especially when the elbow moves fairly well, but by letting the bone heal on its own, if this doesn’t happen, it can be very painful.