What is Cradle Cap?

Cradle cap (dermatitis seborrhoica seum eczema seborrhoicum) represents chronic hyperproliferation of epidermis most commonly present on scalp or face. It is most common in infants and adolescents. Seborrheic dermatitis is a multifactorial disease and microorganisms such as Malassezia species and Pityrosporum ovale play an important role in its pathogenesis. Dermatitis seborrhoica affects approximately 1-5 % of the population worldwide. 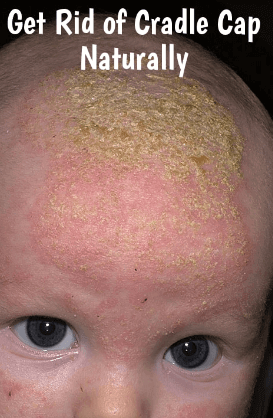 Skin colonization by Malassezia furfur begins soon after birth and the peak presence of the yeasts occurs in late adolescence and early adult life. It coincides with increasing activity of sebaceous glands and concentration of lipid in the skin. (1)

Malassezia globosa and Malassezia restricta are able to catabolise lipid molecules contained in sebum. The products are free fatty acids and tryglycerides. It has been as well noted the increase in number of natural killer cells (NK1+) and CD16+ cells.

The exact pathogenetic mechanism of dermatitis seborrhoica is not yet fully understood, although it is associated with numerous genetic, environmental and health factors. It is a consequence of synergistic effect of Malassezia microorganisms and sebaceous lipids, seborrhea, immune impairments, neurogenic distress and emotional impairment.

It has been found that a lipophilic yeast fungus Pityrosporum ovale has a major role in the onset of dermatitis seborrhoica. It is normally found on the skin as a member of resident flora, especially on the seborrheic regions as of the face and torso.

The clinical diagnosis of seborrhoic dermatitis is based upon a thorough clinical investigation and personal medical history. In more severe forms, a skin biopsy and fungal culture may be necessary. Histopathological findings of seborrheic dermatitis include hyperkeratosis, acanthosis, local patches of spongiosis and parakeratosis.

The most important is to distinguish seborrhoica dermatitis from psoriasis vulgaris, especially when the changes are localized only in the scalp. Differential diagnosis can best be done if there are typical changes for one or another disease in the rest of the predilection places.

Nowadays, treatment modalities include antifungal regimens, antiinflammatory agents (steroids, calineurin inhibitors and lithium salts), keratolytic agents and phototherapy.In case of chronic use of the local corticosteroids, there may arise certain complications such as skin atrophy, telangiectasia, rosacea and acne. Itraconazole is effective in the treatment of Malassezia species.

In local therapy, the use of imidazole products ( such as ketoconazole in the form of creams for skin and hair shampoo) may be efficient as well as hydrocortisone 1% or 2.5% twice per day. Skin should not be treated with fluoridated corticosteroid preparations.

For hair washing it is recommended to use shampoos with zinc pyrithione, selenium sulfide or tar derivatives. For capillitium in a shorter period, it is advised to use gels or lotions with fluorinated corticosteroid (flucionolon acetonide).It can be applied and combined therapy antimycotics – corticosteroids. If there are signs of secondary infections, it is advisable to administer topical and / or systemic antibiotic therapies.(2)

Climbazole (1-4-chlorphenoxy-1-1H-imidazonyl-3,3-dimethylbutan-2-one) is an imidazole antifungal agent that is effective in the treatment of human fungal skin infections. It inhibits antifungal activity inhibiting ergosterol that is a major component of fungal cytoplasmic membranes.

Piroctone olamine (1-hydroxy-4-methyl-6(2,4,4-trimethylpentyl)-2(1H)-pyridone, 2-aminoethanol salt) is a derivate of pyridine. It is a constituent of many cosmetic products with antifungal effect. Piroctone olamine penetrates the cell membrane and creates complexes with iron ions, thus inhibiting energy metabolism in mitochondrias.(3)