Also referred to as hypophysis, hypophysectomy is a surgical procedure done to remove the pituitary gland with aim of treating tumors. The pituitary gland is located just behind the bridge of the nose on the bony hollow and its size is that of a pea. It is attaches to the base of a person’s brain through a think stalk.

Pituitary gland is referred to as the master gland because it takes control of several other hormone glands found in the body such as the testicles, ovaries, thyroid, and adrenals.

In some people, pituitary tumors may cause complications, which necessitate the removal of the gland. Pituitary tumors are atypical growths occurring in the pituitary gland and they can lead to too many hormones being produced or at other times, they cause lower production of the hormones.

There are different options for treating pituitary tumors and they include removal of the tumor, control of the growth and management of the hormones. 1,2

The main purpose of having hypophysectomy is to get rid of the pituitary gland that has been inflicted with tumors. Removal of the gland is important and taken as a drastic step in case the cancer or tumors have resisted other kinds of treatment.3 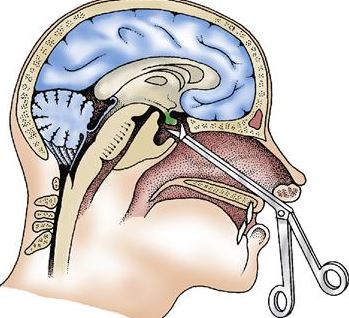 It is commonly applied in case of craniopharyngioma tumors. This surgery may also be performed to help treat Cushing’s syndrome- which is a hormonal disorder arising due to prolonged exposure to higher levels of a hormone known as cortisol to the body tissue.

Cushing’s syndrome is mostly associated with begin tumors referred to as pituitary adenomas. Hypophysectomy type of surgery is aimed at removing the tumor while trying to partially preserve the gland. Previously, the aim of the surgery was to remove the pituitary to help treat cancer, however, nowadays, the aim of the surgery is to remove tumors and preserve the gland.

Again, hypophysectomy is a common surgery procedure applied in neurosciences where doctors experiment in labs using animals to try to understand how the pituitary gland functions. 4

Hypophysectomy whether surgical, radiosurgical, or chemical can offer relief to pain related to cancer. However, the mechanism in which this surgical procedure offers relief to pain is not clearly understood. The procedure is beneficial in cancers that respond to hormones such as breast cancer, prostate cancer, and others. It may also relief pain that is associated with some other kinds of tumors. 5

In the United States, Cushing’s syndrome is quite a rare disease and mostly affects adults who are in the age between 20 and 50. It is believed that about 10 to 15 people in every a million persons may be affected each year. However, reports from Pituitary Network Association say that about one in every five people has a pituitary tumor in the global scale.

While there are several procedures applied to surgically remove the pituitary gland, a surgeon is the best placed medical professional to recommend the most appropriate one to be done depending on your specific case. The pituitary is located directly behind the nose, therefore the best approach is accessing it through the sinuses or nose.3,5

This involves opening of the skull where the frontal lobe of the brain is lifted to expose the neck of the gland. However, while the procedure may be applied in specific cases, it is usually recommended if the tumors have spread and affected the pituitary fossa, which is the cavity where the gland lies. The craniotomy procedure is done using temporal approach.

This is a 3-dimensional technique that uses X-rays or image scans to provide guidance to the surgeon. With this surgery procedure, instruments may be placed in the patient’s brain with pinpoint accuracy, and this is done through minute holes in the skull. The instruments are able to manipulate the tissue of brain in which case they destroy it or alternatively remove it.

Sometimes, stereotaxis may be used to help direct radiation in a precise manner with use of a gamma knife. The access to brain lesions may be done through blood vessels with use of small tubes and wires and with guidance of X-rays.

Before a patient undertakes the procedure, he or she should keep healthy and ensure they are relaxed. An evaluation is first done on pituitary gland to determine how it is functioning.3

A patient may need an MRI scan of the gland to determine if hypophysectomy is the right procedure to be performed. The patient will check in hospital usually a day before the procedure is conducted so that blood tests, electrocardiogram, chest X-ray, and other tests are done.

While the surgical procedure applied is carefully selected to ensure minimal risks and complications, sometimes, there are risks associated with the surgery. These risks include:3

Surgery may be seen as a common treatment option for pituitary tumors. However, in patients where hypophysectomy has not yielded good results or they are not suitable to have the surgery, a doctor may consider an alternative treatment. Radiotherapy may be opted in such cases.

With radiotherapy, it involves the use of high-energy X-rays to aid in destroying cancer cells and shrinking the tumors. The radiation for treating tumors in the pituitary gland is provided over a period of six weeks, but it may take months or years for patients to feel better.

The success rate of radiation also depends on the severity of the tumors and whether it is being performed on adults or children, with kids showing greater improvement. Doctors may administer a drug known as mitotane or Lysodren alongside radiation therapy to help in speeding recovery.