What is Bartholin Gland Cyst?

The Bartholin’s ducts need to be remained open in order to secrete the fluid. If these openings are blocked, the fluid couldn’t get out and they build-up in the glands. The glands that have swelled is called Bartholin’s gland cyst. The size of the cyst may range from the size of a penny to one that may be larger than an orange fruit. The swelling is usually painless but if the fluid inside the cyst becomes infected, the woman may develop a pus collection that is surrounded by inflamed and tender tissue [1, 2, 3, 4].

Blockage of the Bartholin’s ducts can be caused by presence of thick mucus, injury, infection or swelling. Excess skin growth on the labia may also cause blocking of the Bartholin’s duct. The size of the cyst may increase when engaging in a sexual activity because stimulation causes the lands to produce more fluid [2, 3, 4].

Bacterial pathogens may cause an infection in the Bartholin’s gland cyst. Examples of these pathogenic organisms are Chlamydia, Gonorrhea, Escherichia coli and Methicillin-resistant staphylococcus aureus [2, 3, 4, 6].

The symptoms that is experienced by an individual depends on the size the cyst. If the cyst is small, there may not be other symptoms that are present. A large cyst, on the other hand, may present as a painless lump in the vulvar area. Redness or swelling may be present in the vulva which may cause some discomfort during walking or sitting [2, 3].

If the cyst becomes infected, it will cause some pain until it is resolved. The pain will get worse which make it difficult to walk or sit. Fever and chills may be experienced accompanying the swelling in the vulvar area. There may be pus or drainage present on the cyst [2, 3].

The Bartholin gland cyst may be discovered by the patient or by the physician during a routine pelvic examination. Sexual history will be obtained to verify the possibility of a sexually transmitted infection (STI). Physical assessment will include examination of the Bartholin’s gland [2, 3, 7].

Laboratory testing are commonly not required in diagnosing a Bartholin’s gland cyst, but if the presence of STI is suspected. This may include a urine or blood culture to identify the pathogen. If the patient is more than 40 years old, a biopsy of the cyst will be performed to rule out the possibility of vulvar cancer [2, 3, 7].

There are Bartholin gland cyst that resolve without undergoing any treatment. Performing a hot sitz bath or soaking the cyst in a shallow and warm bath may be helpful in healing the cyst. It is important to inform the patient to avoid engaging in any sexual activity to prevent stimulating the Bartholin’s cyst to produce more fluid. Nonprescription pain medications will be beneficial in reducing any pain that may be present [2, 3].

Infected cyst may break open on their own and heal in around 3-4 days. Antibiotics may be prescribed by the physician to assist in treating the infection. There may be a need to drain the cyst and placed with a small drainage tube. This will prevent the Bartholin’s duct from closing and the fluid from accumulating. Once the glands have healed, the tubes will be removed [2, 7].

The surgical procedure called marsupialization may be performed if there is recurrent abscess. After the draining the abscess, a pouch will be created over the cyst to ensure that it will drain properly [2, 8].

If the Bartholin’s gland cyst keeps on reoccurring, a surgical removal of the gland and duct will be removed. This procedure will require an excision of the gland and the tissue surrounding it. It is a disfiguring procedure and is only indicated if malignancy is present [2, 8]. 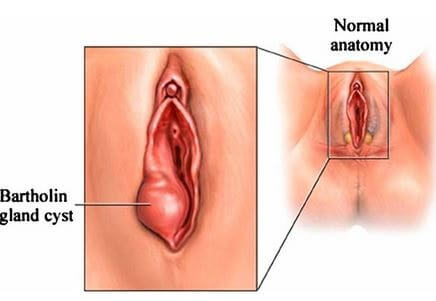