What is colles fracture?

Colles Fracture, named after and described by Abraham Colle’s in 1814, is a fracture of the distal radius in the forearm with specific dorsal and radial displacement of the wrist and the hand. Basically, it occurs when the radius of the bone in the forearm breaks.

The radius is the larger of the two main bones in the forearm. The distal pat of the radius is the end near of the wrist. In a Colles wrist fracture the distal end breaks and can cause the wrist to bend in an abnormal way. The Colles fracture is one of the most common and challenging of the fractures.

Colles Vs Smith Fracture (An opposite to it)

Depending on the severity of the injury, one may experience pain while moving the wrist. One may not be able to hold or grip anything, and wrist will be swollen bruised. Colles Fracture is often referred as the Colles Wrist Fracture due to the definition of the fracture.

Colles fracture is found more often in older people with brittle bones and in children, whose bones tend to be soft.

Females are prone to this injury than male. In U.S.A and Northern Europe, Colle’s fracture is the most common type of fracture that women up to 75 years of age experience. It is particularly common in patients with osteoporosis (a disorder in which bones become very fragile and more likely to break).

Younger patients are affected by Colle’s fracture mainly due to sudden fall during contact sports, skiing, horse riding etc. Generally in these cases putting the hands out to stop the fall can cause Colle’s fracture. To summarize the entire Colle’s Fracture, it can be said that fracture that results in the wrist is Colle’s Wrist Fracture.

The symptoms of the fracture vary according to the severity of the problem. However, the major and most common symptoms are following. 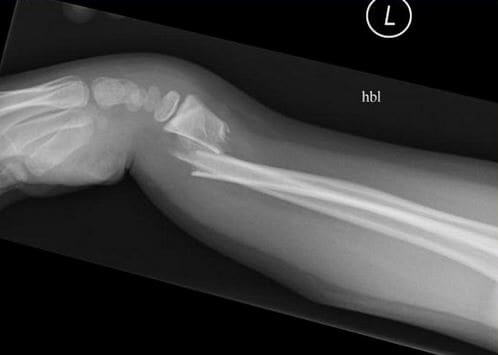 Mainly the preliminary symptoms are a pretty good indication for detecting a broken wrist.

The doctors categorize the fracture according to how and the location of the bone fractured. This helps to determine what course of action is needed. Types of fractures include –

One basic thumb rule for treating the broken bone is: the broken pieces must be put back into position and prevented from moving out of place until they are set.

There are many treatment options for a distal radius fracture depending upon the nature of the fracture, patient’s age and activity level, and the surgeon’s personal preferences.

Nutrition: Enough intakes of calcium and vitamin D which helps to build up the bones.

It cannot be guaranteed always that after a surgery or casting patient will restore full control of the wrist. But the patient should be able to move the fingers after the surgery or casting. After successful surgery or cast, for full recovery of the movement physical therapy is much needed in order to restore the movements of the wrist through a session of certain exercises and physiotherapy. Sometimes due to improper cast and / or negligence, chronic pain will be felt while lifting a heavy object.