What is Spasmodic Torticollis ?

Disorder is characterized by the abnormal head positioning, involuntary muscle, contractions of cervical spine, head tremor and sustained neck spasms and craniocervical pain. This phenomenon is an extremely painful neurological movement disorder which results to usual posture of the head.

According to NSTA or National Spasmodic Torticollis Association, the occurrence of this disorder is approximately 3 in every 10,000 people and roughly about 90,000 people in the United States are known to agonize this disorder.

Furthermore, the condition is said to be originated in the basal ganglia portion of the brain. A disturbance in the homeostasis of chemicals manufacture in the brain is possibly responsible. And one the chemicals known to be is the Acetylcholine that is being affected.

According to SpasmodicTorticollis.org, the neurotransmitter or chemical messengers that are secreted from the basal ganglia and travel through via nerve pathways leading to certain muscles of the neck. The increased nerved signals result to cause spasms to occur which cause the head to be pulled per renderings to the left.

As the onset of the disorder, patient will experience excruciating pain and may be come worsen as it progresses. In a normal daily basis, patient will have difficulty in standing, sitting, walking and even eating.

Medical doctors often misdiagnosed this disorder such as Parkinson’s disease, Wry Neck, or Cerebral Palsy or Dystrophy, but according to them it is not those diseases but Spasmodic Torticollis. 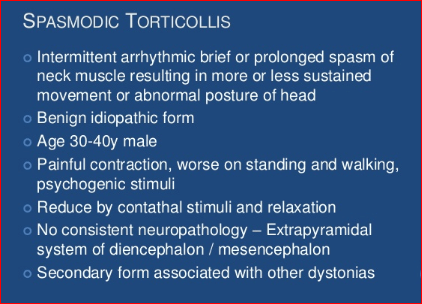 Spasmodic Torticollis causes are still idiopathic or in lay man’s term is it “unknown.” Some genetic testing has been conducted and some of it are still on going, they claimed the disorder to be hereditary. In fact, approximately 50% of the Spasmodic population, there is a family history of hand or head tremors or familial or essential tremors.

Generally speaking, there is no definite and exact explanation why Spasmodic Torticollis occur or what causes it. Studies are still on going to decipher the mystery behind this condition.

Since Spasmodic Torticollis is an involuntary contraction of the muscles in usually affects one side of the neck, patient will experience signs and symptoms listed below;

Other symptoms may include; 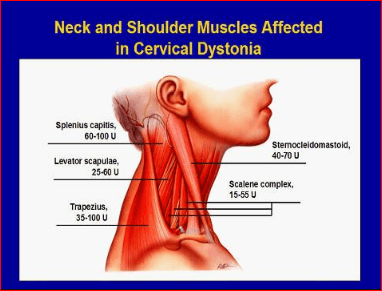 Spasmodic Torticollis is being diagnose by using Toronto Western Spasmodic Torticollis Rating Scale (TWSTRS), the common used scale to rate the severity of ST. This test has been widely used to accurately determined the condition of the patient if he or she is highly suspected with ST.

There are three scales in the TWSTRS; Torticollis Severity Scale, disability Scale and Pain Scale. These scales are used to describe the severity, including the pain and general lifestyle of ST patient.

While there is no specific cure for ST. Considering to seek your medical doctor is highly advice. Note also “Prevention is better than cure”, that is why early treatment is highly suggested even with a mild ST, as this may help to prevent the progression of the disorder.