What Is Left Posterior Fascicular Block?

The left Posterior Fascicular block (Lpfb) is defined by irregular contraction of heart muscles, whereby it travels to the inferior and posterior portion of the left ventricle of the heart and does not conduct electrical impulse transmission from the atrioventricular node.

Instead, the wave-front moves rapidly through the left anterior fascicle and bundle branch which resulted to a right axis deviation that commonly seen on the ECG or electrocardiography.

The Lpfb is rare condition that can affect anyone of us. When your cardiologist told you that you have a bundle branch block it means that you are showing abnormal pattern based from your distinctive ECG reading.

The bundle branches play major function in terms of the cardiac electrical system, it is the structure that normalizes the hearth rhythm and coordinates the pumping mechanism of the heart. As we will recall our knowledge about heart’s mechanism, the heart beats are liable for its own electrical signal. 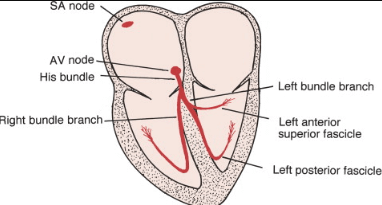 However, when something hinders and hampers the signal transmission across the different atria it causes blockage or causes abnormalities in the homeostasis of heart rhythm.

What happens during the Lpfb?

According to Dr. Edward Burns, during the blockage in the Lpfb in terms of reaching the ventricle, the first electrical vector is directed upwards and leftwards causing the small R waves in the lateral lead (I and avVL) and small Q waves in the inferior leads mainly the II, III, and aVf. 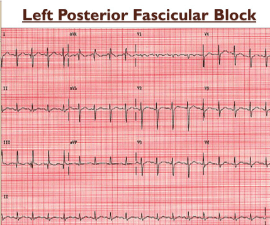 Then, the major wave of depolarization are spread along the free Lv wall in downward and rightward motio, leading to the production of large positive voltages (tall R waves) in the inferior leads and deep S waves in the lateral leads.

The process performs for about 20 milliseconds longer than simultaneous conduction for both fascicles which results to a slight opening of Qrs.

Finally, the signals or the electrical impulses reaches the inferior leads results to an increased R wave peak time equals to the time from the onset of the Qrs to the peak of the R wave in aVf.

Reading an ECG to find hemiblock abnormalities shouldn’t be ignore because it gives a hint to search for an underlying heart disease.

The Left Posterior fascicular Block or significantly known as the “left posterior hemiblocks” are approach diagnostically by defining some its criteria;

According to Edward Burns who is a passionate emergency physician and a zealous interpreter of ECG working in Prehospital and Retrieval Medicine at Sydney Australia. Some of the benchmarks to diagnose accurately the Lpfb are the following,

The Ecg is the primary device to visualize the heart’s electrical impulse, as it moves through the heart. When there is an abnormal movement of the impulse based from the ECG reading it gives the doctor a hint that there’s something happening in the heart’s mechanism.

The occurrence of Lpfb is quietly rare and always relates with Rbbb. For instance, in Argentina and other Latin American countries cases of Chagas disease is endemic.

Left Posterior Fascicular Block or Left Posterior Hemiblocks with or without Right Bundle Block Branches (Rbbb may be found in cases of severe chagasic myocarditis.

For the reason that, the posterior division of Lbb(Left Bundle Branch) is the least defenseless segment of the intraventricular conduction system, the rate of Lphaccompanied with RBB is an indication of complete heart blockage.

As a matter of fact, when the conduction system experienced severe lesion they alter the conduction in the posterior fascicle, it is self-evident that the Righ bundle branch (Rbb), the anterior of Lbb (left bundle brunch are also involved. Therefore, it gives a significant evidence of AV block in Rbbbwith Lph.

Some possible treatment can be used below but specific treatment is always dependent on the blockage degree and clinical symptoms present. Generally, treatment includes some clinical protocols;